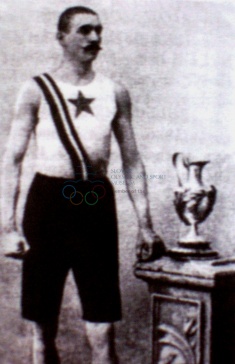 Alojz Szokol (featured in the official Olympic results under the name Alajos Szokolyi) was not only the first Olympic "medallist" coming from Slovakia (the inverted commas are in order for the reason just first two competitors got medals at the Olympic Games in 1896), but also the first Olympian coming from Slovakia ever. As the only one of our natives, he started in the colours of the Kingdom of Hungary at the Games of I Olympiad 1896 Athens already. Alojz Szokol came from Hronec, his parents and grand parents were Slovaks. He acted not only as the versatile athlete in the capital city of the Kingdom of Hungary (he held the Hungarian records in 9 disciplines), but also as the sports official, in 1897 as one of the founders of the Hungarian Athletic Union.