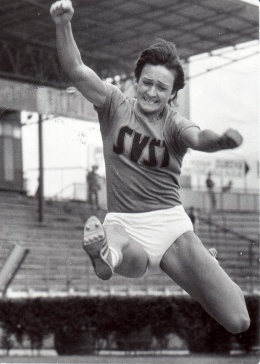 The Games of XX. Olympiad in 1972 in Munich – bronze medal

Eva Šuranová, Née Kucmanová is historically the only one female athlete from Slovakia, who won the Olympic medal and the first female Slovak at all with the Olympic medal in the individual discipline. Eva Šuranová entered the history of the Slovak sports in particular by winning the bronze in long jump at the Olympic Games in 1972 in Munich and the silver medal in the same discipline at the European Championship in 1974 in Roma. She reached the greatest international successes in long jump, yet she became the Champion of the Czechoslovak Socialist Republic in four disciplines – eight times in long jump sector, once in pentathlon, 100 meters hurdles and 100 metres. In total, she made 25 Czechoslovak records in various disciplines.

The Olympic competition in Munich was the competition of her life-time for her. She jumped better than anytime before in a great combat with the domestic star Rosendahl and Jorgova from Bulgaria. In her second attempt, she shifted the limit of the Czechoslovak record to 660 cm and she improved in the fourth attempt even to 667 cm! At that time, she was second after  Rosendahl (678), but Jorgov jumped over her (677 cm). Eva remained the third one, but her two jumps with foot-faults, experienced with the contribution of a strong wind, were somewhere at the level of the winning performance… Eva Šuranová experienced another starry moments two times later, at the European Championship in Roma. She won the silver with the performance of 660 cm; she was jumped over by just five centimetres by Hungarian Bruzsenyák. She could not establish herself at the Olympic Games in 1976 in Montreal and at the European Championship in 1978 in Prague, but she ended her career at the age of 32 as the real legend of the Slovak athletics. In 2014, she was called the Sports Legend by the Club of Sports Editors of the Slovak Syndicate of Journalists at the traditional ceremony called the Athlete of the Year.