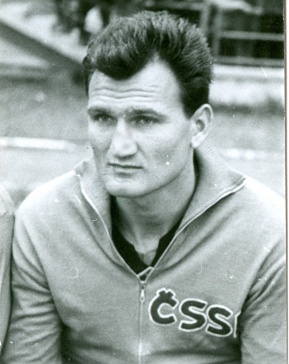 The Games of   XVIII Olympiad 1964 Tokyo –  the silver medal
The well-built goalkeeper, native from Jarovce, František Schmucker, stood in the goal in five matches at the Olympiad in Tokyo. He played 13 times for the Olympic pick altogether. In A team of the Czechoslovak Socialist Republic, he got chance just in two matches – it is strange they were separated by eight years. Schmucer was at the World Championship in Chile in 1962, where Vytlačil´s men got silver, but in the competition of Schrojf and Kouba, just in the position of third goalkeeper, so he got to the grass just in a single preparatory match before the World Championship. However, in 1st league, at first in the sports dress of RH Brno and then of Baník Ostrava, he caught in exactly 300 league matches. Being 36-year old veteran, he enjoyed the National Championship of the Czechoslovak Socialist Republic with Baník Ostrava.