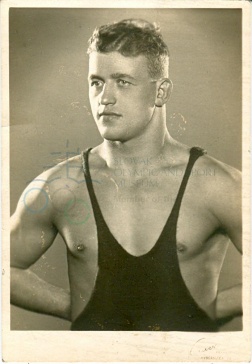 The Greco-Roman wrestler Jozef Herda entered the history in Berlin as first sportsman from Slovakia representing the Czechoslovak Republic who won the Olympic medal. He started his sports career in Prague, at first as a weightlifter, yet very soon he discovered the lure of mats. In 1932 already, his performance entitled him to start at the Olympic Games in Los Angeles. However, the Czechoslovak Republic was represented there by a mini-expedition due to the lack of funds and he did not get there. The World War II stole him the chance to get another Olympic medal. Versatile Herda was the Champion of the Czechoslovak Republic in the Greco-Roman and free style and he took 15 National Championships altogether.  He stopped competitive wrestling at his 46 only (!), while he pursued also coaching and secretary work in Dunajplavba Bratislava long time ago.