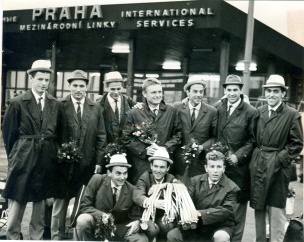 Július Toček was unjustly deleted from the history of Slovak sports for many years. He experienced the top rowing career in the Czech Republic and they stated Děčín as the place of his birth by mistake in the Czechoslovak Olympians Yearbook of 1987. When he emigrated in 1968 after the occupation of Czechoslovakia, they did not write about him in media and he lapsed in obscurity. He started devoting himself to rowing while studying at the Bratislava Apprentice School of Czechoslovak Danube Navigation. He continued in the field in further education in Děčín.  He got to Dukla Terezín to serve in military, yet he spent the best rowing years in Slavoj Vyšehrad of Prague. From that place, he got also to the Olympic Games in 1964 as the member of eight. After emigration, he settled in the Swiss Winterthur. He again appeared in his original homeland only after the change of the regime in 1990. In 2002, he took part in the meeting of Slovak Olympians at the occasion of the 10th anniversary of the establishment of the  Slovak Olympic Committee.