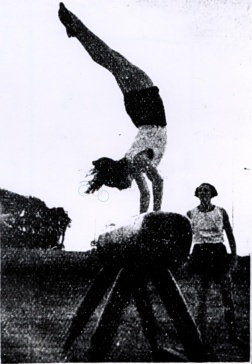 In a strong team of the Czechoslovak Republic, Pálfyová belonged to the best competitors since 1935. In Berlin, the member of Sokol Košice contributed to the silver medal of the team (on contrary to men, women had just this one gymnastic competition) as fourth member of eight in performance. At the World Championship in 1938 in Prague, after the team competition, Pálfyová as the first Slovak female in history enjoyed the World Championship (women did not compete in the individual disciplines on apparatuses at that time, unofficially she had the highest marks for rings and vault). Furthermore, she added the bronze medal in multicontest of individuals, behind her countrymen Vlasta Děkanová and Zdena  Veřmiřovská. After felling down from a horse in Malé Brestovany, she tragically died at the age of 32 years only. The Slovak Olympic Committee worshipped her memory by awarding the Prize of Matylda Pálfyová since 2005 every year. It is dedicated only to women - for their sports results, activity in sports and in the Olympic movement.