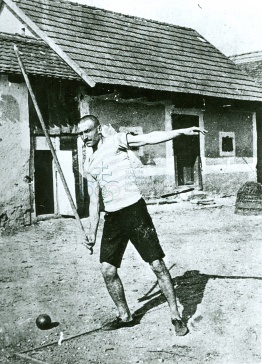 The versatile athlete – thrower Mór Koczán from Kocs at the Žitný ostrov (the Rye Island) (originally Kóczan, he competed also under the pseudonym Miklós Kovács at the Olympic Games) picked out four throw disciplines in his premiere Olympic start. He did not succeed in any of them – he was rejected in qualification in all of them. He did much better at the Olympic Games 1912 Stockholm, where he won bronze in the classic javelin throw with his performance of 55.5 m as the member of FTC Budapest. One year before the Olympiad he even made a unofficial world record in javelin throw with his performance of 60.64 m. After the World War I, he was the member of Sparta Prague and he represented the Czechoslovak Republic. At the Olympic Games in 1924 in Paris, he started at his age of 39, he reached 22nd place in javelin throw. He went in for athletics both as a coach and referee.