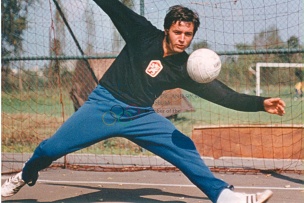 The goalkeeper, a specialist in seven catching, he played just 28 matches in the national team altogether and he got to the Olympic short-list almost at the last moment. In Munich, he stood out in particular in the last match of the Czechoslovak team in semi-final group against the Union of Soviet Socialist Republics During his player´s career, Peter Pospíšil devoted to sports photography, later professionally in weekly Šport and in his own agency Štartfoto, that was established by him together with old colleague Ján Súkup. The highest internationally award - the victory in World Press Photo competition - was gained by his photograph of weightlifter Ján Nagy from the Games of XXI Olympiad 1976 Montreal. As an accredited journalist, he participated in six Olympic and seven Winter Olympic Games, he was the author of several Olympic publications.