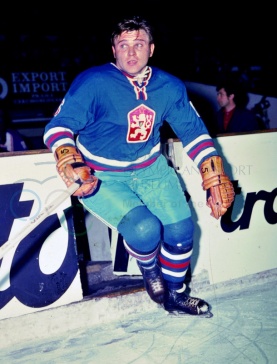 Rudolf Tajcnár went through his entire domestic career in Slovan Bratislava, save the period of military service in Dukla/VSŽ Košice. He played more than 300 league matches in nine seasons, he netted 60 goals. He played 54 interstate matches in the dress of  the Czechoslovak Socialist Republic and netted 9 goals. At the World Championship in 1971 in Switzerland, he was in a silver team and he also took the European Championship.  In 1972, he contributed to the achievement of the Olympic bronze medal in Sapporo at first and then he enjoyed the World and European Championship in Prague. In 1976, he illegally left the republic. He left for Canada, finally he completed his career in Switzerland. However, he longed for home and so he illegally returned to Bratislava when he used a foreign passport at the time of communist regime. He repeatedly underwent the psychiatric treatment. When he died in 2005 as 57-year old man, they found him in his flat only after several days, so the exact date of his death is unknown.